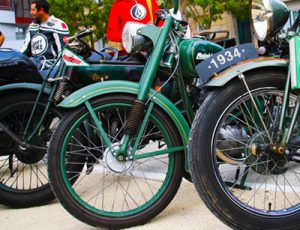 An online survey was carried out in 2016 focussing on motorcyclists who had crashed while riding a motorcycle fitted with Advanced (anti-lock) Braking Systems (ABS).

The survey was a pilot study to identify specific issues relating to crashes involving motorcycles fitted with ABS.

The objective of the survey was to find out from riders, their experiences which will be used to provide information to improve training and the technical development of future ABS, the wealth and depth of information provided by the motorcyclists who participated allows for a wide range of analysis of the details that resulted from the questionnaire and the responses.

They overwhelmingly recognised the risk of injury if they are involved in a crash and thus wore highly protective clothing and helmets. 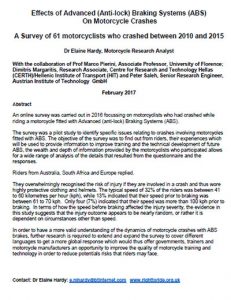 The typical speed of 32% of the riders was between 41 to 60 kilometres per hour (kph), while 13% indicated that their speed prior to braking was between 61 to 70 kph.

Only four (7%) indicated that their speed was more than 100 kph prior to braking.

In terms of how the speed before braking affected the injury severity, the evidence in this study suggests that the injury outcome appears to be nearly random, or rather it is dependent on circumstances other than speed.

In order to have a more valid understanding of the dynamics of motorcycle crashes with ABS brakes, further  research is required to extend and expand the survey to cover different languages to get a more global response which would thus offer governments, trainers and motorcycle manufacturers an opportunity to improve the quality of motorcycle training and technology in order to reduce potentials risks that riders may face.