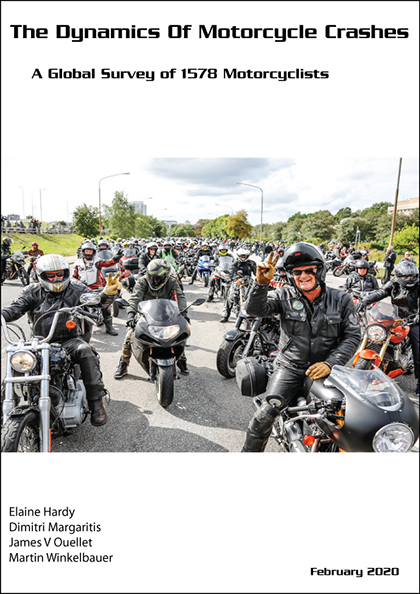 The analysis of a global survey of 1578 motorcyclists who responded from 30 countries in Europe, the USA, Asia, Australia and South America and in eight languages in 2019 has been published in a comprehensive report.

Riders of motorcycles, scooters and mopeds who had been involved in a collision over the last ten years were invited to take part in the survey which looked at the dynamics of motorcycle crashes.

The riders who replied to the survey came from a varied age range, motorcycling experience, as well as depth of skills and training.

The new research presented in the report, most importantly involved riders bringing their personal experience and their expertise beyond that of simple academia.  Riders understand motorcycling in way quite different than that of academia, where statistical analyses of large databases such as police reports and hospital records has displaced research that requires in depth crash scene investigative knowledge.

The riders’ crash details which were provided through the responses to the questions as well as the comments they offered, brought those stories of personal experiences which included treatment of their injuries, pillion riders and the dynamics of their crash, that in their own words allowed a deeper insight into the dynamics of crashes and the circumstances. These could not have been captured in a usual ‘tick box’ survey.

The fact that the authors of the report are all motorcyclists and are aware of the dynamics of riding a motorcycle with the potential risks riders face, was fundamental in the analysis of the responses because it meant that they all understood the issues that riders face in traffic and out on the road.

Particular focus most relevant to motorcycles included the use of protective equipment and assistance systems, in particular Advanced (anti-lock) Braking Systems (ABS).

Evidence from the Riders’ Responses

What became evident from the findings of the survey, was that orthodox motorcycle accident analysis appears to be “looking the wrong way”. Typically, motorcycle accident studies have identified human error as the major cause of collisions. Other reasons considered are the lack of training, sports bike riders taking unnecessary risks and riding at high speeds which has been used as a measure for severe injuries.

However, the evidence provided in this report demonstrates that the correlation between speed and the seriousness of injuries is random, in other words, the speed of the motorcycle when it crashes with another vehicle, road infrastructure or an object or animal does not necessarily determine the severity of the injuries of the motorcyclist.

This finding is important because it allows analysts and researcher to focus their attention on what the evidence in this study provides, which is the mechanism of the crash (the trajectory of the rider post-crash and what he/she hits) has far more importance than speed in terms of the type and the severity of injuries. In fact, the post-crash motion “Topside” occurred in 63% of those cases where the rider collided with a car. In terms of injuries this type of trajectory dominates both the range of type of injuries and the severity.  This is an area of research that needs further attention, indeed, the report recommends further research that has been drawn out from the conclusions.

The authors: Elaine Hardy, Dimitri Margaritis, James Ouellet and Martin Winkelbauer would like to thank all those riders in the countries from both the Northern and Southern Hemispheres who took part in the survey to make the report possible, especially those who shared their personal trauma and those of their loved ones.

Finally, to those others who shared their expertise and advice, profound gratitude is owed to all and hopefully this will open up a whole new chapter of motorcycle crash causation investigation. 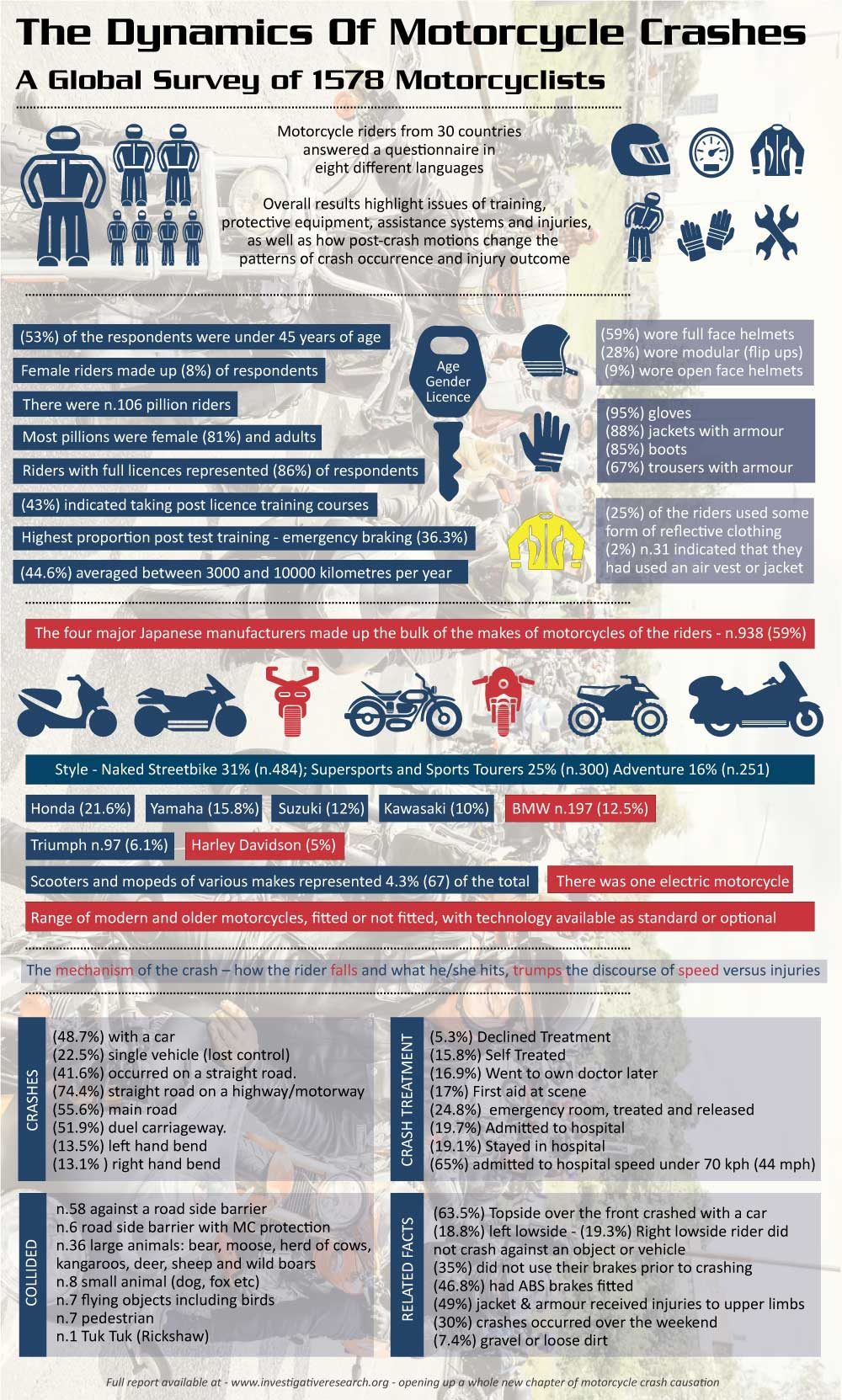