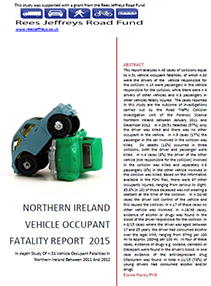 The cases reported in this study are the outcome of investigations carried out by the Road Traffic Collision Investigation Unit of the Forensic Science Northern Ireland between January 2011 and December 2012.

In n.29/51 fatalities (57%), only the driver was killed and there was no other occupant in the vehicle. In n.9 cases (17%) the passenger in the car involved in the collision was killed.

Six deaths (12%) occurred in three collisions, both the driver and passenger were killed.

Based on the information available in the FSNI files, there were 67 other occupants injured, ranging from serious to slight.

35.3% (n.18) of those deceased was not wearing a seatbelt at the time of the collision.

In n.24/48 cases the driver lost control of the vehicle and this caused the collision. In n.17 of these cases no other vehicle was involved.

In n.18/48 cases, evidence of alcohol or drugs was found in the blood of the driver responsible for the collision.

In four of these cases, evidence of drugs e.g. cocaine, cannabis or Diazepam were found in the driver’s blood.

In one case evidence of the anti-depressant drug Citalopram was found. In total n.11/15 (73%) of young drivers had consumed alcohol and/or drugs.

The study and analysis of the findings of the Road Traffic Collision Investigation Unit – Forensic Science Northern Ireland and a selection of Coroners’ reports was carried out by Elaine Hardy PhD, Research Analyst and supported by the Rees Jeffreys Road Fund.