Who Rides London? – A survey of motorcyclists who use PTWs to ride to work in London 2018 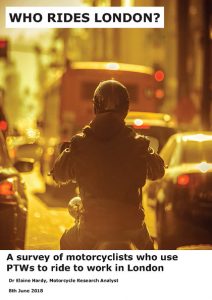 In March of this year a survey was distributed to riders which asked the question – Who Rides London?

The aim of the survey was to identify motorcycle, scooter and moped riders who typically commute to work or study in London, to determine the typical riders’ profile and the type of bikes/scooters/mopeds travelling in these areas.

The reason behind the survey was that a ULEZ (Ultra Low Emission Zone) is being planned for introduction in London with motorcycles to be charged £12.50 per day, the same as all other vehicles.

The objective of the survey was to find out from riders, information which will be used to identify the proportion of those who would be most affected by the proposed charges.

The survey was initiated by Dr Elaine Hardy and publicised on the website Investigative Research NI. www.righttoride.org.uk as well as on the website www.motorcycleminds.org

As a Research Analyst and Project Manager, Elaine has more than two decades of research and project managing motorcycle issues as well as her expertise on vehicle theft related research.

The results of the study will hopefully offer riders the opportunity to put forward a case for continued free access to all areas in London for all Powered Two Wheelers (PTWs). The fundamental argument, as demonstrated from other studies in Europe, is that PTWs use far less travel time, are far less likely to be held up in traffic jams and the cost of travelling is far less than public transport or cars.

An online survey was carried out between March and May 2018 (six weeks), focusing on motorcyclists who typically ride PTWs (motorcycles, scooters or mopeds) to work within the proposed ULEZ (Ultra Low Emission Zone) areas of London.

Although low wages is in part supported by some of the comments from riders who own pre Euro 3 PTWs and work in the inner London Congestion charge zone, it is not the more predominant reason of the riders who replied to the survey for using this standard of PTW (nor the Euro 3 standard PTWs) to travel to work.

The factors indicated in the comments of the riders relate to time and travel cost. In other words, PTWs enable the rider to cut travel time considerably, from 2 to 3 hours using public transport to half an hour, at least half the time of using a car or van.

Furthermore, the cost of travelling is considerably less than using a car or public transport.

Other reasons include the unreliability of public transport; for those working shifts, similarly, the unavailability of public transport. In some instances, riders who have to travel into London indicated that the overall cost and time consumed to get to train stations or bus stops far outweighed the use of PTWs. They also indicated that the trains in particular were frequently late or cancelled.

There is a major problem in London with the theft of PTWs with over 14,000 thefts identified London in 2017 (11% of PTWs registered in the London area). Riders have every reason to be concerned and have a strong case to present to exempt the ULEZ charges for older PTWs. Because an analysis of Motorcycle Theft in London, indicates that the main reason motorcycles are stolen is for spare parts.

By examining the information from the survey, the majority of PTWs used by the respondents are Naked (standard) motorcycles or Adventure types. As these bikes (especially the newer models) are targeted by criminals for spare parts, the solutions to prevent the theft of these vehicles include better parking facilities “but also using old battered up bikes for commuting to deter the discerning thief”.

It is a paradox that the Mayor’s Office is looking for solutions to prevent the high levels of theft by denying access to London through the high daily charges for riders who choose to ride pre Euro 3 bikes in consideration of the fact that these older PTWs are less attractive to thieves.

Whether the answer is exemption from the charge altogether or a proportionate charge in consideration of the fact that the overall usage of Pre Euro 3 PTWs is less in comparison to Euro 3 standard PTWs.

The fundamental argument, as demonstrated from other studies in Europe, is that PTWs use far less travel time and are far less likely to be held up in traffic jams. Thus in real terms, the pre Euro 3 PTWs would pollute less in comparison with four wheeled vehicles that are compliant with the later 4 and 5 Euro standards, especially diesel fuelled vehicles, simply because they are not standing idle for the lengths of time that cars, vans, lorries and buses are.

It would not be beyond the realms of the authorities of London to look again and consider that a solution can be found with what should be a reasonable and realistic compromise.