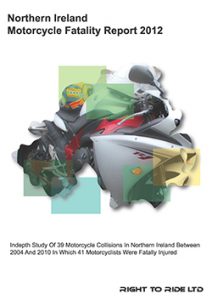 The “Northern Ireland Motorcycle Fatality Report 2012” contains an analysis of 39 collisions investigated and includes information relating to vehicle data, the collision scene and the environment as well as human factors.

Overall, 41 motorcyclists were fatality injured, equal to 36% of total motorcycle fatalities during 2004 and 2010 in Northern Ireland.

The evidence provided in this report indicates that each road traffic collision is unique but that in all cases the time frame from the perceived hazard to the conclusion of the impact either with another vehicle or with road infrastructure was typically between 2 and 3 seconds.

There were two cases identified where Anti-Lock Braking Systems (ABS) may have made a difference to the outcome of the collision, both were on a straight section of road.

Of the 39 cases analysed, there were 17 cases (43.6%) in which another vehicle was considered the primary cause of the collision. In thirteen of these cases (76.5%), the evidence highlighted that the motorcycle’s lights were switched on and therefore the other vehicle driver was in a position to see them.

However, there appears to be a problem of looking but not seeing which may be due to the size of the motorcycle or simply because the car/van driver is expecting to see another car or van and has difficulty coping with the unexpected.

There were four cases (10.3%) of speeding, but in all cases, the actions of the other vehicle driver precipitated the collision. Equally there were four known cases (10.3%) in which the rider had levels of alcohol over the legal limit and or drugs in their blood.

Three of these collisions were single vehicle (no other vehicle involved) and the fourth ran a red light through an intersection with no headlights on and impacted a car crossing the intersection.

There were 9 cases (23%) in which the motorcyclists involved in a collision were either riding in a group or with another motorcyclist. In all these cases the total number of motorcyclists killed was n.11/n.41 (26.8%).

A focus group of trainers, a collision investigator, police and government agency representatives discussed the relevance of technology on vehicles as a deterrent to collisions as well as the advantages of teaching hazard perception and anticipation in initial and advanced training as a defence against potential collisions.

The consensus was that while technology may in some cases be beneficial, good training was more important.

However, the availability, image and cost of advanced training seemed to be a barrier to getting more riders involved.

Emphasis is needed in car driver training to include more focus on scanning for VRUs (Vulnerable Road Users).

According to the participants of the focus group, the best solution to avoid road traffic collisions is anticipation and hazard awareness.

The consensus was that the only reliable way to prevent motorcyclist injuries and deaths is to prevent the collision in the first place, which means the rider needs to get his/her eyes up and scanning ahead, taking evasive action when a potential collision is still several seconds from happening. 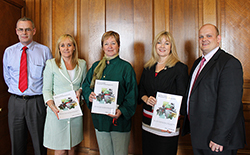 Following the presentation a discussion took place amongst civil servants and riders to better understand accident causation and possible solutions.

It was a really good day at Stormont with those that mattered.

Our thanks to MLA Michelle McIlveen, who has always showed an active interest in motorcycling issues and has been supportive of Right To Ride’s initiatives – for hosting the event and thanks to her fellow DUP MLA’s, Brenda Hale and Ian McCrea for attending. 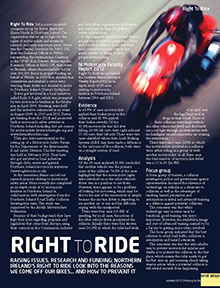 In the 2012 Summer edition of the BMF (British Motorcyclists Federation) members’ magazine – Motorcycle Rider, Right To Ride is featured in a full page article.

The study was supported by the British Motorcyclists Foundation.

Right To Rides Elaine Hardy will be in Germany in September and October 2012 to present the findings of the report to international road safety experts. The presentations will be at the 5th International ESAR (Expert Symposium on Accident Research) Conference in Hannover and the IFZ (Institut für Zweiradsicherheit e.V.) 9th International Motorcycle Conference in Cologne.

The IFZ conference will take place prior to the International Motorcycle, Scooter and Bicycle Fair INTERMOT 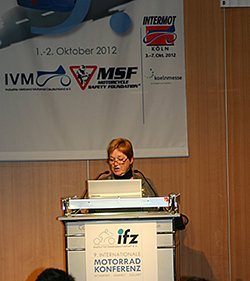 On the 7th September 2012 Right To Ride’s Elaine Hardy present her findings in Hannover, Germany at the ESAR International Conference “Expert Symposium on Accident Research”.

The fifth ESAR International Conference was held over two days and brought together representatives from authorities, medical and technical institutions to discuss new research issues and exchange experiences on accident prevention and the complex methodologies of accident reconstruction.

On October 1st 2012 Elaine made a further presentation at the International Motorcycle Safety Conference (ifz) in Cologne, Germany.

The conference gathered scientists, researchers and practitioners to provide the opportunity to discuss the complex aspects of active safety work for two wheelers with contributions from specialists from all over the world.