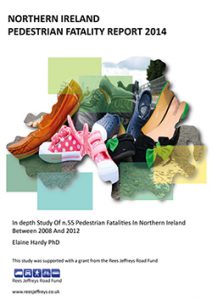 Road Traffic Collision research from numerous countries highlights that driver visibility during darkness, elderly and intoxicated pedestrians have a common theme which is cognitive impairment.

The report “Northern Ireland Pedestrian Fatality Report 2014″ indicates that cognitive impairment underpinned most of the pedestrian fatalities attended by the the Road Traffic Collision Investigators in Northern Ireland between 2008 and 2012.

The findings from the report support the proposition that:

The Road Traffic Collision Investigation Unit attends road traffic fatalities in Northern Ireland. Over the five year period between 2008 and 2012, n.8 investigators attended the collision scenes analysed in this report.

The findings of these reports are supported by n.37 Coroners’ Verdicts.

The study and analysis of the findings of the Road Traffic Collision Investigation Unit – Forensic Science Northern Ireland and a selection of Coroners’ reports was carried out by Elaine Hardy PhD, Research Analyst and supported by the Rees Jeffreys Road Fund.

Dr Elaine Hardy and author of the pedestrian fatality report spoke at the Road Safety GB Conference on 26th November 2014.

The National Road Safety Conference 2014 was hosted by Road Safety GB South East Region at The Grand in Brighton.

For the first time a fringe programme ran alongside the main conference.

There was an exhibition showcase which included various road safety related exhibiters. 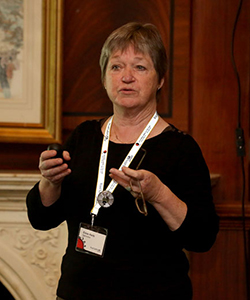 Dr Hardy used her conference presentation to outline her findings.

The report highlights three areas of concern – visibility, the elderly and intoxicated pedestrians – all of which are underpinned by cognitive impairment. Dr Hardy will use her conference presentation to outline her findings.

Prior to moving to the road safety sector, Elaine Hardy was an automotive data analyst. Her work involved gathering data and analyzing the distribution and cross-border movement of cars and vans in both Eastern and Western Europe. This led her to take an interest in the movement of stolen vehicles in Europe and and she has authored numerous reports and papers and worked with European and British authorities on projects and studies relating to vehicle crime.