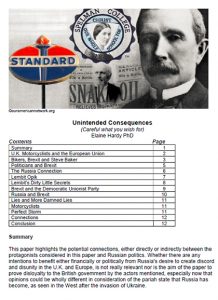 This paper highlights the potential connections, either directly or indirectly between the protagonists considered in this paper and Russian politics.

Whether there are any intentions to benefit either financially or politically from Russia’s desire to create discord and disunity in the U.K. and Europe, is not really relevant nor is the aim of the paper to prove disloyalty to the British government by the actors mentioned, especially now that opinions could be wholly different in consideration of the pariah state that Russia has become, as seen in the West after the invasion of Ukraine.

The purpose really is to demonstrate how through unintended consequences, paths cross and depending on the strength and power of the protagonists, how their influence on others can ultimately define politics on a grander scale.

What is relevant to this paper is the attitude and political views taken whether because of religious beliefs, or nationalistic ideals of a sovereign nation or possibly more important, the hunger for power. Power is a fickle master and as has been highlighted can lead to positions that can have disastrous effects on a wider and sometimes gullible community.

The relationship between the protagonists is documented in this paper and demonstrate that the affinity of political and religious beliefs and power all appear to coincide in one way or another, what also connects them for all the wrong reasons, are motorcycles and through this, influence and abuse of people who simply use this form of transport either for commuting or for leisure.

From that to issues such as the U.K. breaking away from the European Union, everything has escalated into a deeper and darker world.